What killed the railroad "turnip"

In July 1959,  a disgusted railroad worker wrote to "Railway Age" magazine asking why it was "that even though wristwatches can now be made accurate enough to satisfy both the Air Force and the commercial airlines, railroads should still insist on the pocket watch ?"
The editor of the magazine sent a copy of the letter to Mr John Walker Barriger III (Head of Pittsburgh and Lake Erie Railroad) for comment, he had some ideas on the subject but wasn't going to respond without checking with other experts in the industry. "As I reflected upon the fact that non-railroad transportation, industrial, military and technical operations which require equal or even more complete accuracy of timing than railroads do, we are controlled in respect to time by men who use wristwatches." he said later, "it seemed to me that the latter should also have railroad approval".
"The wristwatch is far more convenient,  since railroaders seldom wear vests any more." he added, and trousers are more and more likely to come without watch pockets." He suggested that Mr. Donald P. Fleming (General Manager, Pittsburgh and Lake Erie Railroad) should review the matter with staff members,  and with the Train Rules Committee of the New York Central System. When none of these found anything wrong with the idea, Mr. Barriger made one of the practical moves for which he is noted and that was, to find out where and how to arrange for getting a wristwatch that was just suited to railroad requirements. He got in touch with Mr. Jack R. Pugh (official watch inspector to more than a dozen railroads) to discuss both what special features such a watch should have,  and whether one already was made, or would have to be designed.

Since Mr. Pugh had been pondering the matter for a Long time, he had plenty of ideas on the subject. Indeed, he had already worked out needed modifications for adapting the Elgin "B. W. Raymond." a long-time favorite with many railroaders in America.

Designing a watch wasn't new to Mr. Pugh as he has designed others, including a special number particularly adapted to the needs of nurses. After discussing all phases of the question, Mr. Barriger laid down 10 requirements for approval of any wrist watch for railroad use.

1. A 23-jewel movement.
2. The new balance wheel (DuraBalance).
3. Unbreakable mainspring (DuraPower).
4. Special stainless steel case, indented top, easy to wind.
5. Shock proof.
6. Water proof.
7. Non-magnetic shield around the movement, inside case.
8. Non-magnetic steel dial.
9. Six adjustments, three of which are to be for position.
10. Movement stops when stem pushed out for setting.
Mr. Pugh got touch with Elgin and Hamilton. The two principal makers of  American railroad watches, and before the end of the year, each had submitted samples of wristwatches designed to meet the needs indicated by Mr. Barringer.
Testing started in 1959 between Elgin National Watch Company and P&LE railroad with the newly designed B. W. Raymond Wrist Chronometer[1]Pittsburgh Post-Gazette, 07 Jul 1960, Page 40.
While P&LE were carrying out their tests before approving the new B. W. Raymond Wrist Chronometer, they were beat to the punch of being the first Railroad to approve wrist watches for use.
The Bessemer and Lake Erie railroad which had also seen the letter published in the railroad magazine in 1958 had issued a new set of operation rules on December 1st, 1959.
B&LE railroad submitted the rule "designated employes shall carry a reliable, jeweled watch, pocket or wrist variety". R. B. Hood, assistant to the president, "From what I have been able to see, everything has been going along just as well as it did when we had definite requirements as to size and number of jewels".
P&LE Railroad amended the operating rules on June 13, 1960 to officially approve the B. W. Raymond Railroad Wrist Chronometer for use by all trainmen and other designated employees who must know time accurately.
Three other railroads, Great Northern, Northern Pacific and Spokane, Portland & Seattle were carrying out testing of the new wrist watch.
By December 1960, the entire New York Central system approved the B. W. Raymond Railroad Wrist Chronometer for use.
In 1960, Elgin advised that only 2% of its entire domestic production was pocket and lapel watches, clearly indicating that the time of the pocket watch was coming to end quickly. 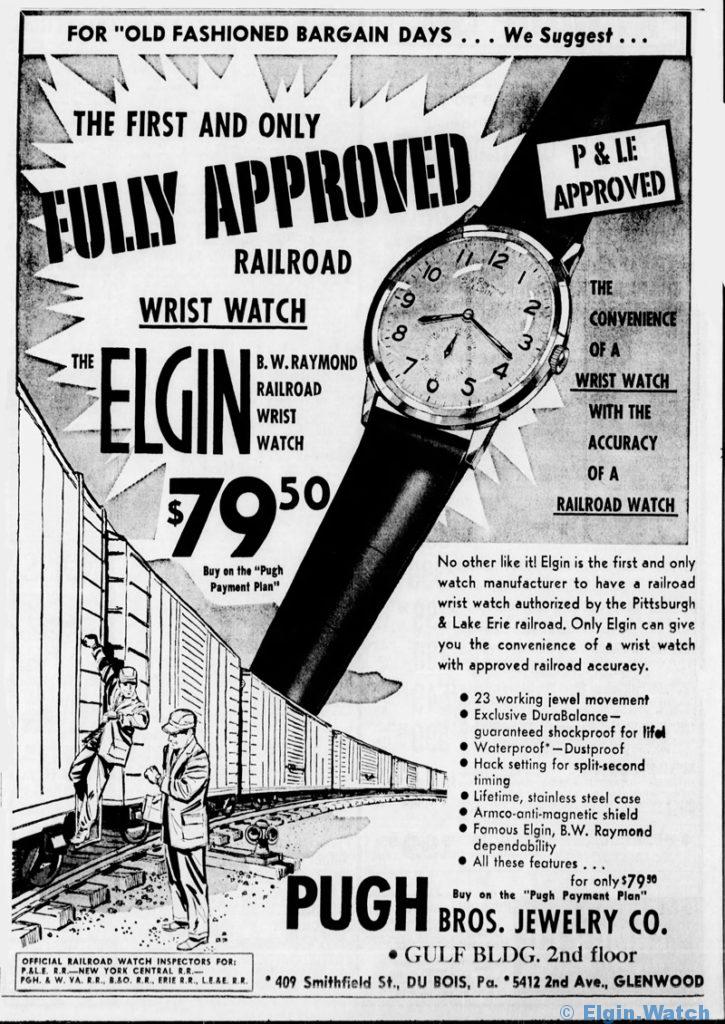 The B. W. Raymond Railroad Wrist Chronometer was released in the following models
When Elgin discontinued domestic production in 1964, they replaced the existing models with an updated case and an imported Swiss movement (Grade 873) which was a A. Schild 1604B, 21 J movement. 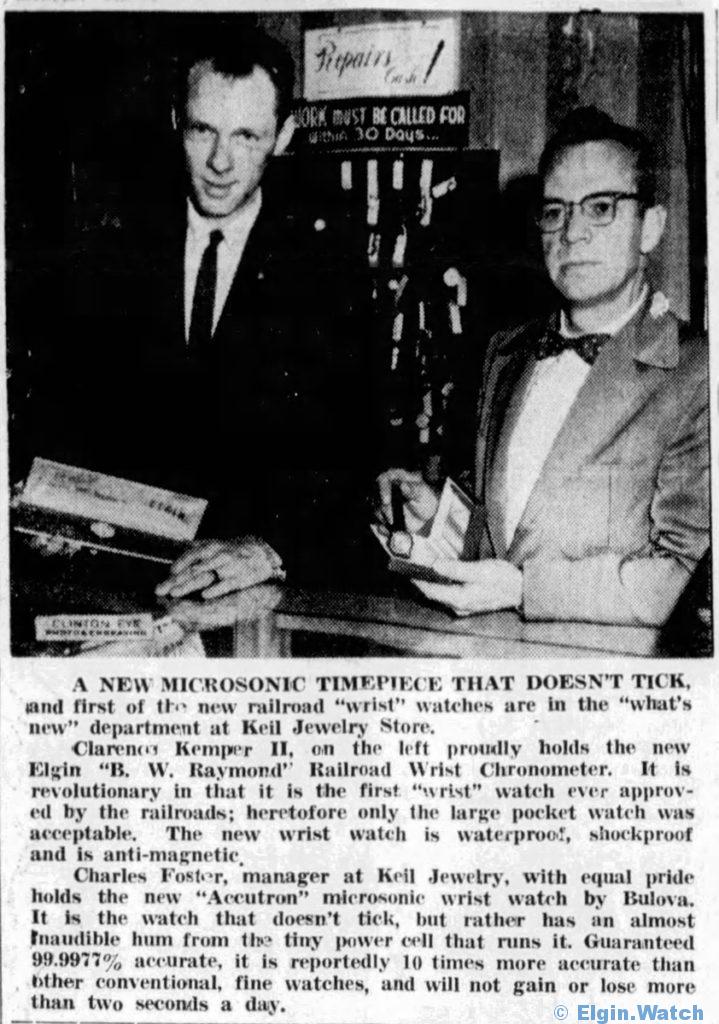 Elgin would have the railroad wristwatch market to themselves for close to two years and it would be the only wrist watch model and last model to bare the prestigious B. W. Raymond name. 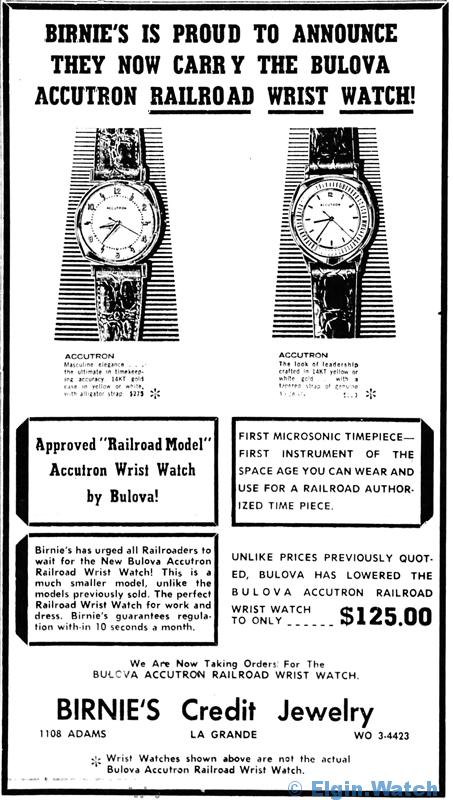 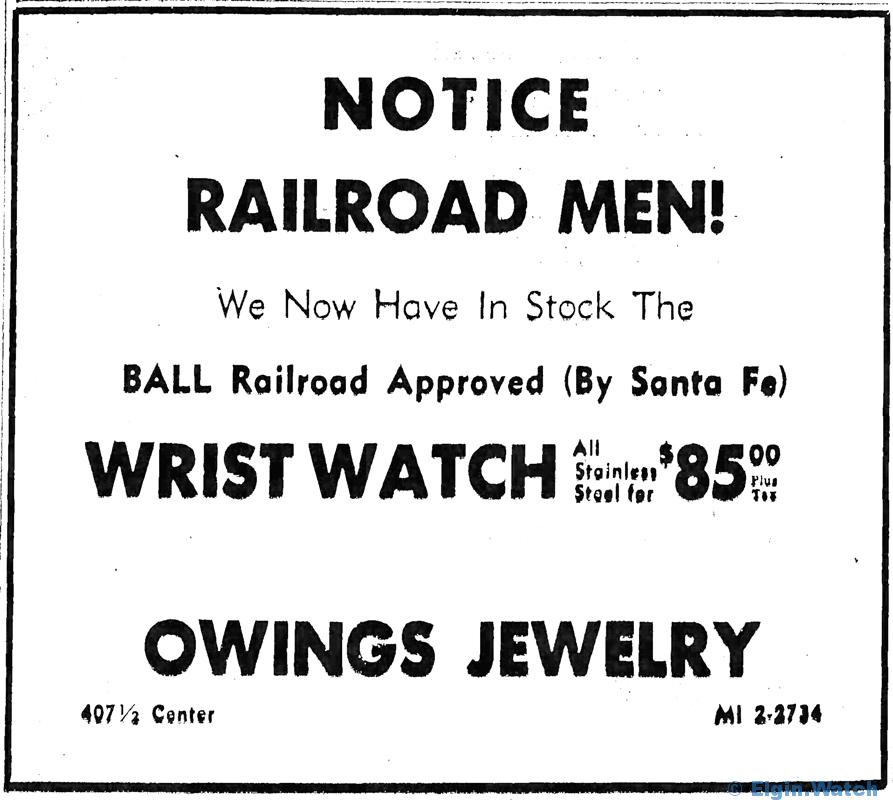